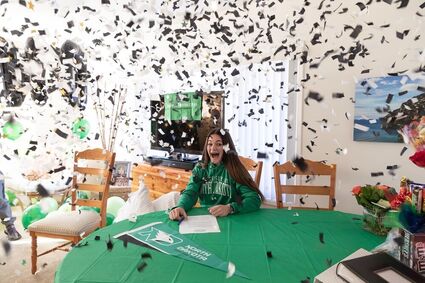 Fallbrook High senior Baylee Howley reacts as friends and families shower her with confetti as she signs her letter of intent to play softball at the University of North Dakota. Village News/Courtesy photo

Fallbrook High School senior Baylee Howley signed a letter of intent to play softball at the University of North Dakota.

Howley signed her letter of intent with the Fighting Hawks at her home Feb. 5. The signing was witnessed by about 15 family members and friends.

"It was very exciting to have family and friends watching. They were always there supporting me through my journey to getting here at this point," Howley said.

"I'm just super excited for her to be able to continue at that level," Stehle said. "She's a wonderful kid. She has a lot to offer North Dakota's program."

Howley will be a preferred walk-on at the University of North Dakota, which means that she won't immediately receive an athletic scholarship but will have the registration privileges of Fighting Hawks athletes as a freshman. She was also considering the University of Redlands.

Howley began her softball career with the Fallbrook Girls Softball organization when she was 8, although her softball experience preceded her play. "My dad played softball," she said. "I just grew up with them playing and watching them."

She then played for Oceanside Fast Pitch before beginning travel ball with The Factory, which is based in Rancho Bernardo. Howley has played travel ball for six years and is currently with the Athletics Mercado club, which practices in Murrieta. During the weekend prior to Howley's letter of intent signing Athletics Mercado won the Arizona Winter Invite tournament in Gilbert. "We all came together and played together," Howley said.

One of Howley's grandfathers was born in the Philippines, which makes Howley eligible for the Filipino youth national softball team. In March 2021, Howley learned that tryouts would be held the following month in Chino and that the youth national team was seeking a catcher. Four days after the tryout Howley was notified that she had been selected for the team. Howley was one of four San Diego County players who participated in the Triple Crown International Challenge tournament in June 2021 in Westminster, Colorado.

"It was an amazing experience. It felt like the College World Series," Howley said. "It was just very exciting and a lot of adrenaline."

Howley appeared in two games for the Filipino team. Her defensive accomplishments included throwing out two runners trying to advance to second base. Howley's first game was against Great Britain, and she drove in two runners with a double to contribute to the 16-4 Team Philippines win.

Team Philippines began the tournament with three victories before a 1-0 loss to Mexico eliminated the Filipino squad. Howley also played against Mexico.

Howley will seek a berth on the Team Philippines roster for the 2022 Triple Crown International Challenge.

Howley made the varsity as a freshman and was the Warriors' starting catcher. The Valley League coaches named Howley to the all-league second team.

Stehle took over as Fallbrook's coach for 2021. Howley began the Warriors' first game with a leadoff homer and added a single, a double, and two walks in her other four plate appearances. She scored three times, had two runs batted in, and stole a base in the season opener.

The Warriors reached the CIF postseason for the first time since 2014 and concluded 2021 with a loss to Sage Creek in the first round of the Division IV playoffs. Howley had two singles and a double in her three at-bats, scored twice, and stole a base. Howley was also Fallbrook's starting pitcher; in five innings she allowed three hits and five walks while striking out five Bobcats. None of the runs she allowed were earned.

Although Fallbrook had a Valley League record of 0-10 in 2021 the Valley League coaches chose Howley for the all-league first team and she was mentioned in the discussion for the league player of the year award. Howley batted .511 for the season, including non-league games, with 24 hits in 47 at-bats. Eight of her hits were doubles and three were home runs. She scored 17 runs, had 12 runs batted in, stole 11 bases, and drew 10 walks. She only struck out three times in 58 plate appearances (she was hit by a pitch once). Howley had a .603 on-base percentage and a slugging average of .872. She also pitched in five games, hurling 11 2/3 innings with a 6.60 earned run average. On the mound Howley struck out eight batters.

"As a young lady in general she has grown so much over the years," said Stehle, who was an assistant coach in 2019 and 2020. "Her grades are phenomenal, so she really embodies student-athletes."

Howley also played basketball in junior high school. She was on Fallbrook's junior varsity team as a freshman and a sophomore. The coronavirus shutdown delayed the start of the 2020-21 CIF seasons, so basketball and softball were played concurrently and Howley was not in the Warriors' basketball program as a junior.

Her senior softball season may be delayed, as Fallbrook's basketball team has qualified for the CIF playoffs. The Warriors' first softball home game of 2022 will be tomorrow against Guajome Park Academy. If Fallbrook's basketball team reaches the CIF championship game, Howley's first high school softball game of 2022 will be at home March 1 against Mount Miguel.