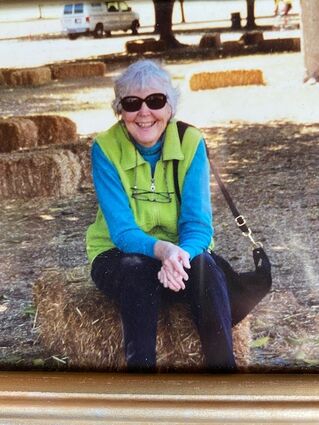 Daphne Ferron Croswell, aka "Nana" and "Big Mother," passed away peacefully March 23, 2022. Daphne was born March 4, 1926, in Portland, Oregon. She is remembered for her beauty, intelligence, quick wit, sense of adventure, and fierce love of family and country. Daphne possessed a wonderful quality of always seeing the best in people and always smiling and making the best of whatever obstacles life were placed before her.

Daphne attended secondary school at St. Mary's Academy in Portland graduating in June 1943. In the fall of 1943, she began her college studies at the University of California, Berkeley. During her college years at UC Berkeley, Daphne joined Alpha Omicron Pi sorority and worked as a model in San Francisco.

While a student at UC Berkeley, she met Robin P. Kantor whom she married in 1946. The young couple soon had two children: Robin born in 1947 and Kevin born in 1949. Daphne decided to delay her college graduation after her marriage and the birth of her first child. The young family moved to Salinas where Robin started a lettuce brokerage company. Tragically, Robin was killed in a small plane crash in Cayucos, California in 1950.

The young family lived on base and Daphne was a housewife while her husband was an active duty Marine. Following her husband's retirement from active duty, the family moved to Tarzana, Los Angeles County. While there, Daphne decided it was time to finally get her college degree, so she enrolled at UCLA in 1965 and graduated with honors in 1966 with a BA in sociology.

In 1974, Daphne moved to Fallbrook. She had first become acquainted with Fallbrook while living on base at Camp Pendleton and fell in love with the beauty of the area. In 1975, Daphne began working for the Department of the Navy in the Civilian Personnel Office at Camp Pendleton. Daphne was a staffing specialist and rose quickly through the ranks of the Civil Service.

Her sense of adventure and love of travel was evident in her decision in May 1985 to take on the position of Chief Staffing Officer at the U.S. Naval Air Station in Sigonella, on the island of Sicily, Italy. There she worked for two years turning a dysfunctional personnel office into an efficient operation while traveling throughout Europe on weekends and holidays.

Some of her favorite travel destinations besides Italy and Sicily were Capri, Germany, Switzerland, Austria, Spain, Hungary, and France. Daphne retired as a GS 11 in 1985 receiving a Certificate of Appreciation from the USMC.

It was following her retirement from the Dept. of Navy that her second career started as the best Nana ever to her growing number of grandchildren. She loved spending time with her grandchildren as well as walking the trails and parks of Fallbrook. Daphne was a lifelong walker/hiker and enjoyed daily walks all over Fallbrook accompanied by her beloved Chihuahua dogs, Poncho and Buddy.

A celebration of life will be held on May 15, 2022, noon to 3 p.m. at area 3 of Live Oak Park in Fallbrook. In lieu of flowers, please consider a donation to the Fallbrook Animal Sanctuary, Nana loved animals and dogs in particular.