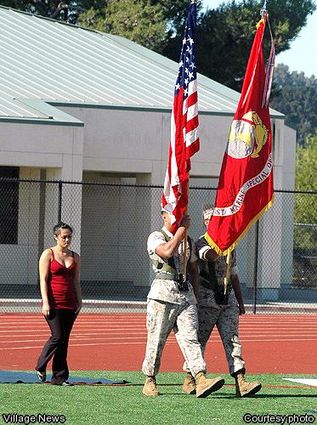 Led by a Marine Corps Color Guard from Camp Pendleton, Frankie Westall walks on to the field to sing the National Anthem during the opening ceremony for Fallbrook American Youth Football.

Their inaugural season ceremony began with a moment of silence for the late Adam Huckins, son Fallbrook High School’s facilities and maintenance director, Curt Huckins. This was followed by the Marine Corps Color Guard and the singing of the National Anthem by Fallbrook’s own Frankie Westall.

Sponsors were thanked, as was Dennis David, director of Fallbrook Youth Scholarships (FYS) who was on hand with his guest, FUHS Warriors 2007 quarte...