By Elizabeth Youngman-Westphal
Special to the Village News

A psychic gift brings out a 'Blithe Spirit' 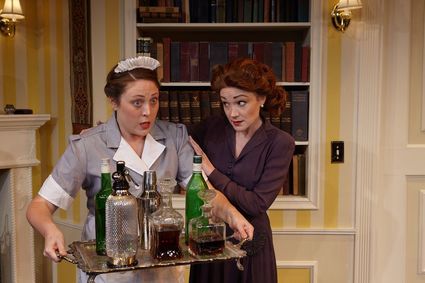 During the dark days of the London blitz in 1941, Noel Coward's office was bombed to the ground. Always wanting to write a ghost story - but not to have anything to with the ongoing war – Mr. Coward left London for Wales where he could find a quiet spot.

In less time than most of us need to write a thank you note, he stuck to a strict regimen and churned out the completed work known as "Blithe Spirit" in just six days. It is a charming and eccentric tale about conjuring up persons from the after world.

As the story opens, the under-maid, Edith (Michelle Marie Trester) is setting up the parlor for pre-dinner cocktails. Over exuberant and anxious to please, Trester hits the mark with her unwitting portrayal of a lowly girl amongst her betters.

Host and novelist Charles Condomine and wife Ruth settle in for a pre-dinner cocktail as they wait for their dinner guests Dr. and Mrs. George Bradman.

Charles is played by J. Todd Adams. He has the distinct carriage of what we have all learned from "Downton Abbey" as the upper crust aka "a gentleman". Played with flair and a clear, understandable English accent (no doubt the result of his years performing Shakespeare), Adams' character is perfection up and until the third act. At which point his frustration gets a bit King Lear-ish. Up to that point, he sustained his suave persona.

Wife Ruth is played on point by Joanna Strapp. She has also mastered an understandable British accent coupled with sparkling comedic timing. She utters words like "poppycock, appre-see-ate (appreciate), fiddlesticks and stew in your own juices" with verve. She is the Lady of the Manor.

Dinner guests Dr. George Bradman and wife Violet arrive in time to join their hosts for a perfect dry martini as the banter turns to the evening's post-dinner entertainment.

Gil Berry as Dr. Bradman is properly overly-supercilious enough to impress even the lowest of low of his superior intellect. He is pompously perfect.

As a research project for his new book, Charles reiterates the after-dinner entertainment is to be the renowned clairvoyant Madame Arcati (Susan Denaker). She is invited to perform a séance. And that is when the real mischief begins.

Unlike Margaret Rutherford who played the part in the film, Denaker's interpretation went from extravagantly silly and interesting to "gawd, will this scene never end?" But, in all due respect, after sitting for 150 minutes, few things are funny. Earlier in her performance, Denaker is quite eccentric and amusing.

Before retiring, Charles invites his wife to join him for a nightcap as he breaks into a rant about the evening's tomfooleries and resolves to never endure anything as ludicrous as a séance again.

Or so Charles thought. For as soon as Ruth retires, who should appear from the after world but his ghostly first wife, Elvira (Teagan Rose).

Ethereal and breathtakingly beautiful, Miss Rose is the personification of ectoplasm. Playing a pouting ingénue twit, Elvira covets adoration from her husband and consequently devises a plan to have him join her in the hereafter. And as all good plays have it...it goes awry. Naturally, who would have it any other way?

Directed by Rosina Reynolds with a light hand, two things stood out. First, the set. It is an English parlor. Sculptured with modern materials, it embodies a gentler time designed by Marty Burnett. Second, Elsa Benzoni is a master costume designer. Mrs. Bradman's (Ava Burton) evening dress is enough to entice any woman to the theatre.

This cozy theatre has excellent viewing from every seat. It is well lit thanks to Matthew Novotny and can be heard from every corner thanks to Aaron Rumley. And many, many thanks to dialect coach Jillian Frost for allowing us to understand the British delivery.

"Blithe Spirit" is playing multiple times each week at North Coast Repertory Theatre in nearby Solana Beach until Sept. 30. This show will sell out even though it runs three hours long. Do not wait to get your tickets. Lots of free parking in the big lot out front. Box office: (858) 481-1055 or visit www.northcoastrep.org. This show is rated 9.75 out of 10.

From time to time a current running show may not make the print issue, however, in most cases the review can still be found online under the heading of Entertainment at http://www.villagenews.com. Kindly look on the website. If you don't see it, write to me at [email protected] and I will forward it to you directly.