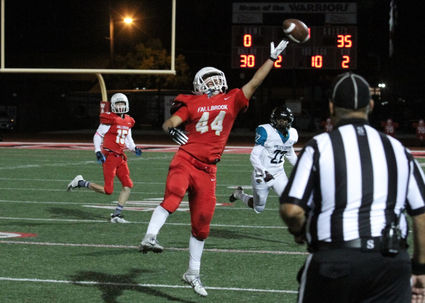 The CIF announced today that high school athletes will be pushed back to start dates in December and January meaning traditionally fall sports, like football won't start for a few months. Winter sports, like basketball, will be moved to the new spring schedule and start in April or May. Village News/Shane Gibson photo

For hundreds of thousands of high school athletes in the State of California, they finally have an answer as to when they can begin competing at local high schools during the 2020-21 school year.

The California Interscholastic Federation (CIF), along with the help of the 10 regional sections, announced on Monday, July 20, that there will be a modified sports season schedule for the upcoming school year that breaks the sports into two groups — fall and spring — instead of the traditional three group system.

“It is anticipated that most section start dates will commence in December 2020 or January 2021,” the statement reads.

Last Friday, Gov. Gavin Newsom ordered that school campuses should remain closed when the academic year begins in counties on the state's monitoring list due to spiking coronavirus cases — including Los

“We are continuously monitoring the directives and guidelines released from the Governor's Office, the California Department of Education, the California Department of Public Health, and local county health departments and agencies as these directives and guidelines are followed by our member schools/school districts with student health and safety at the forefront,” CIF’s statement reads. “As these guidelines change, CIF sections may allow for athletic activity to potentially resume under the summer period rules of the local section.”

The official start dates for competition and training are to be mapped out by each of the sections with the state CIF organization setting dates for the last date for section, regional, and state championships.

While neighboring section, the CIF Southern Section, has start dates for each sport scheduled, the San Diego Section won’t have one for the next couple of weeks but released a statement.

“CIF-SDS is excited to see the foundations of a plan to return high school athletics throughout the state of California for the 2020-2021 school year,” the statement reads. “Today’s announcement from the state office provides our section with the information necessary to finalize the calendars and schedules for all of our CIF regulated sports, while also acknowledging the importance of the health and safety of our student-athletes and coaches by pushing the official start date back to align with the Roadmap to Recovery set by the state of California.”

The San Diego Section figures to have a similar time frame in order to line up with Regional and State championships.

“In collaboration with our Board of Managers, Conference Presidents, Sport Specific Advisory Committees and Officials Association, we will be coming together over the next couple weeks to finalize the dates and schedules for each of the seasons of sport for our section,” the San Diego Section statement reads. “We understand that this has been a difficult period of time for our student-athletes, coaches, athletic administrators, and parents with so much uncertainty and information changing on a daily basis.”

For Fallbrook Girls Water Polo head coach Sean Redmond, it means the season will start a little earlier than usual and they will be sharing the pool with the boys water polo team.

“I'm in a holding pattern, I don't know what it's going to mean to me,” Redmond said. “We definitely have to wait and see what comes out from San Diego Section on what we're going to do, because as you know San Diego, Riverside, and Orange County are on the watch list. So if things don't change between now and December, who knows what's going to happen. That's the other part. This thing literally is changing daily.”

Redmond said he heard an interview with the section’s commissioner that a schedule would be available for San Diego on or around Aug. 14.

Also, the CIF has temporarily suspended a bylaw prohibiting outside competition in all sports for the 2020-21 school year.

That may cause a problem for some sports, Redmond said.

“Considering swimming, gymnastics and diving are pretty much individual sports — team sports, I think that makes it really hard,” he said. “How do you include them into what you're trying to do when they're not there? When they get there and they show up just for a game, they might not know what the plays are, the offense, or how things are supposed to be (based on) what they've been working on.”

“We were just talking and we were surprised when we saw that,” Smith said. “There's always been a history of high school and club coaches not liking each other if they don't do both. I wouldn't have that problem because I have like one club kid, I'm pretty sure he'd pick high school over the club. But for those baseball guys, if you're traveling and let's say you have a condensed season, only 15 games, but you're going to go do a travel baseball tournament for the weekend and you get six or seven games, you're more likely to go play with that team that weekend rather than play the one game with your high school team.”

This is a breaking news story that will be updated when more information becomes available.