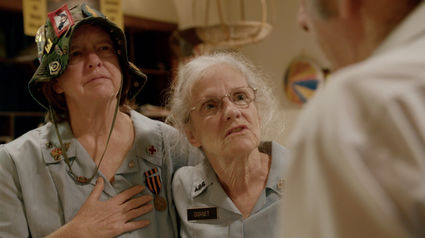 SAN DIEGO – The GI Film Festival San Diego, a military-themed film festival that solely presents films and events for, by and about military service members and veterans, announced a diverse film lineup for its first-ever virtual showcase Thursday and Friday, Oct. 1-2.

Films presented are curated by members of the GI Film Festival San Diego advisory committee. The lineup will focus on current events, women in the service and treatment of Black service members post-World War II.

Members of the advisory committee come from various military backgrounds, including veterans of the Marine Corps, Air Force, Navy, Army and Coast Guard, as well as Air Force Reserves and several military spouses, who volunteer their time, talent and expertise to ensure the festival provides an authentic view of the military experience and engages its audience through post-screening discussions.

The two-day virtual showcase will feature up to six documentary films, including features, shorts and local productions. After each film block, a post-screening discussion will be held where viewers can hear from filmmakers, subjects and local experts to explore the important topics and issues raised in the films. All of the films selected highlight a different aspect of the military experience, from World War II to the Vietnam War to current events.

"The Rifleman's Violin," Thursday, Oct. 1, at 5 p.m., tells the story of a 90-year-old virtuoso violinist Stuart Canin who recounts his deployment to the German front as a 19-year-old GI with his rifle and violin on his back during World War II.

"Rescue Men: The Story of the Pea Island Life Savers," Thursday, Oct. 1, at 5 p.m., tells the story of a Black lifeguard station that performed many daring rescues from 1880 to the closing of the station in 1947. A former slave and Civil War veteran, Richard Etheridge served as captain and the only Black man to lead a lifesaving crew.

"No Greater Love," Thursday, Oct. 1, at 7 p.m., depicts the combat deployment of the legendary "No Slack" Battalion, 101st Airborne Division, during the Afghanistan War through the eyes of Army chaplain Justin David Roberts.

"In Their Own Words: The Tuskegee Airmen," Friday, Oct. 2, at 5 p.m., tells the story of the first African American pilots of the U.S. Army Air Force who protected the flying bombers during World War II.

"She Wore Silver Wings," Friday, Oct. 2, at 5 p.m., offers insights into the Women Airforce Service Pilots who served during World War II, told through Jean Landis, a San Diego County resident who was part of this elite group. The film won the "Audience Choice" award in the 2015 GI Film Festival San Diego.

"Donut Dollies," Friday, Oct. 2, at 7 p.m., is a poignant documentary that follows two best friends and former Red Cross Donut Dollies back to Vietnam to retrace their steps and ask whether they made a difference. The film won "Best Documentary Feature" at the 2019 GI Film Festival San Diego.

Since its inception in 2015, the GI Film Festival San Diego has presented more than 164 films and attracted thousands of attendees from various backgrounds. As a community effort to help bridge the military-civilian divide, each film selected tells a compelling and unique story that may challenge notions about what it means to serve and goes beyond one-dimensional depictions of veterans, service members, their caregivers and families.

In addition to filmmakers from around the world, the festival also honors San Diego area filmmakers through the festival's local film showcase, organized in partnership with the Film Consortium San Diego. The festival has also hosted several celebrities that took part in films selected for the festival, including documentary filmmakers Ken Burns and Ric Burns; actor and activist George Takei; actor Matthew Marsden; actor, producer and director Jeffrey Wright and actor and director Brenda Strong.

The coronavirus pandemic accelerated plans to reschedule the GI Film Festival San Diego, which usually happens in the fall. Organizers moved the full festival to May 18-23, 2021.

"For six years the GI Film Festival San Diego has brought authentic military stories to the big screen," Nancy Worlie, associate general manager of content and communications for KPBS, said. "Not only do the films selected amplify the underrepresented voices of our active duty military, veterans, spouses and caregivers, but also our local filmmakers who have an opportunity to showcase their work nationally. We're excited to present our virtual showcase to provide a preview of what's to come in spring 2021."