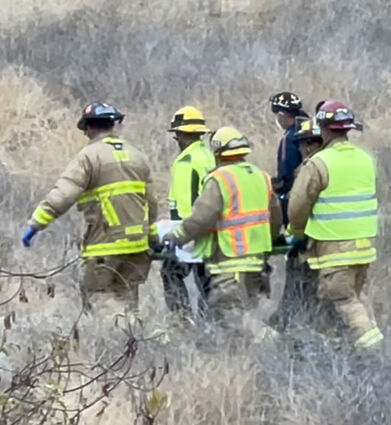 First responders carry the patient to the Mercy Air ambulance who took the most life-threatening patient from the accident on Tuesday, Aug 31 on Old Hwy 395 and Stewart Canyon.

An accident was reported at 1:12 p.m. at Old 395 S. and SR 76. Rescue crews found that it was actually 1 1/2 miles north of there at Old Hwy 395 and Stewart Canyon. Cruisers arrived on scene and found a 2004 Champagne-colored Honda Odyssey over the side between Hwy 395 and the freeway. It had rolled off the road and landed at the base of a hill. There were two adults with life-threatening injuries. The parent most critically injured was partially ejected, according to NCFPD PIO John Choi and transported by Mercy air ambulance to Scripps Memorial. The other parent was transported by ground ambulance to Palomar Hospital. One pediatric patient, who was in a full restraining car seat, was transported by ambulance to Children's Hospital with minor injuries. 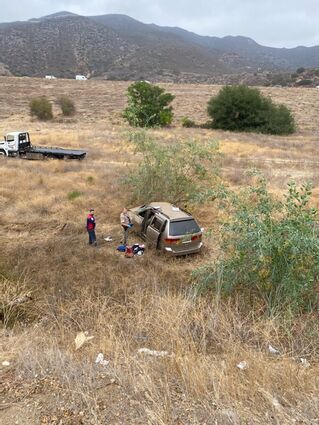 The Honda Odyssey rolled off the road at Old Hwy 395 and Stewart Canyon.