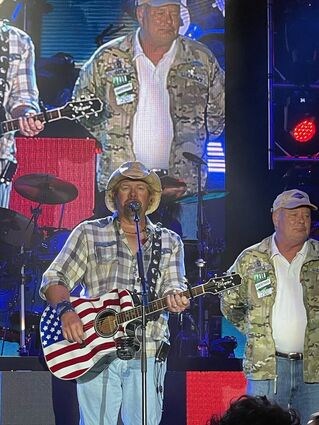 When Toby Keith performed at Pala Casino he had an Afghanistan combat veteran join him on stage for the encore of his Sept. 17 concert.

Sergeant Major (retired) Michael Boom helped Keith sing "Courtesy of the Red, White, and Blue" (sometimes also called "The Angry American"). "It was an honor to represent the military that night," Boom said.

Keith met Boom about eight years ago during one of Keith's performances for America's military troops. "I showed him around," Boom said. "He did a concert for my soldiers."

Boom was an airborne Ranger in the United States Army. He was in the Army for 30 years, joining in 1983 and retiring in 2013. He was born and raised in Sacramento and moved to San Diego County after he retired from the Army. He now lives in Ramona.

"Whenever Toby comes near where I'm living, I reach out," Boom said.

Keith or his representative will ask how many tickets Boom and his family need.

When Keith traveled to Iraq and Afghanistan, he sought the combat areas rather than the bases. "He told me, "I want to go where the soldiers are'," Boom said.

"He'd go out to some desolate outpost," Boom said. "It meant a lot to the soldiers."

Keith traveled in a Humvee four-wheel drive vehicle or a helicopter. "He was putting himself in danger every time he did that," Boom said.

"He doesn't even think about the risks. He just wants to get to where the soldiers are," Boom said. "That's something most American people don't realize about him."

Boom was at FOB (Forward Operating Base) Sharana, which is near Afghanistan's border with Pakistan, when he first met Keith. "I had 4,000 soldiers in Afghanistan when he came to visit us," Boom said.

Keith didn't announce his Afghanistan performance to the troops. "He flew in on a helicopter," Boom said. "It was a surprise."

Boom initially told his soldiers that a military band would be performing before telling them they would hear Toby Keith instead. "They just went berserk," Boom said.

Keith performed with a large American flag behind him. "It was a total surprise for the soldiers, and he performed a long concert," Boom said.

Not only did the soldiers see and hear a full concert rather than only a few songs, but Keith then had conversations with the soldiers. "They were just really impressed that he would spend hours," Boom said. "He's a great person. He loves soldiers."

Keith performed 240 shows in combat zones. "He's like what I call the new Bob Hope," Boom said. "He's one of the most patriotic people I've ever met and the soldiers love him – soldiers, sailors, airmen, and Marines."

In his childhood, Boom was a country music fan whose favorite artists included Johnny Cash, Glen Campbell, and Waylon Jennings. "As a kid, my dad took me to see Johnny Cash when I was about 12 in Sacramento," Boom said. "I've always been a country fan since then."

Boom was stationed at Fort Campbell in Kentucky when he first heard Keith's music about 20 years before Keith's visit to Boom's troops. "I was very familiar with Toby when he came out," Boom said.

After Boom's discharge, he saw Keith at a concert in the Sacramento suburb of Roseville. Boom has also seen Keith twice at the San Diego County Fair and, for Keith's 2019 fair concert, he asked Boom to join him for "Courtesy of the Red, White, and Blue." "He does that a lot when he's got military members he knows at his concerts," Boom said.

The Pala Casino concert was thus Boom's fourth after he first met Keith in Afghanistan. Boom requested tickets. "I reached out to his manager and he said: 'How many do you need, Sergeant Major?'," Boom said.

Keith's first song Sept. 17 was "Made in America." "I love that song he starts off all his concerts with," Boom said. "It really tugs at the heartstrings."

"Courtesy of the Red, White, and Blue" was Keith's final song Sept. 17 and the second during Keith's encore; the first was "American Soldier."

"I will see him again," Boom said. "As long as he comes within a couple hour drive, I'll let him know I need tickets and I'll be there."