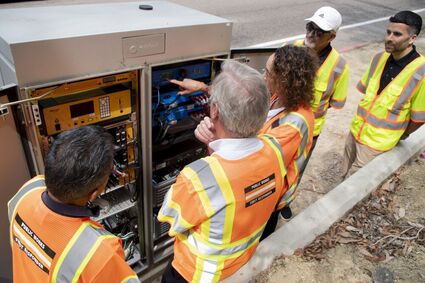 County Supervisor Jim Desmond and Department of Public Works officials recently flipped the switch on a new traffic light backup battery system in San Dieguito that could eventually make residents around the county safer during emergencies.

The pilot project is located at a traffic light at San Dieguito Road and Via Dos Valles, an intersection that Desmond's office said is a major evacuation route for several communities, including 4S Ranch, Carmel Valley and Rancho Bernardo.

The project replaced the traffic signal's existing lead, acid-based backup battery – the kind you'd find in your car – that could keep the light operating for four-to-six hours in a blackout, to newer nickel-zinc batteries that can keep the light working for more than 24 hours.

Having extended backup power could keep people from blindly racing through non-working traffic signals and potentially save lives in an emergency evacuation situation or when San Diego Gas & Electric institutes a Public Safety Power Shutoff in high-wind conditions that increase wildfire risk.

"We can't stop wildfires from occurring in San Diego County," Desmond said, "but we can do our best to keep people safe. Seeing this backup battery's capabilities, I'm confident this will be a major asset during Power Safety Power Shutoff events, and I look forward to seeing many more installed throughout the county."

The Board of Supervisors, led by Desmond and Supervisor Joel Anderson, directed county staff in March to look for ways to reduce the potential impacts of Public Power Safety Shutoffs, including backup power for road infrastructure and major intersections.

Anderson was also pleased by the pilot project.

"Installing these longer-lasting emergency backup batteries at traffic lights, particularly along evacuation routes, is something that will be very important for the safety of my constituents," said Supervisor Joel Anderson. "My constituents have lived through major wildfires in the past, including two of the largest in state history, the Cedar fire in 2003 and the Witch Creek fire in 2007."

The San Dieguito light was chosen as a test site because it had ample space for installing up to eight nickel-zinc battery packs. The project was paid for by the vendor because it was conducted as a test.

In addition to closing schools and businesses, suspending water service in some areas, and shutting off television and radio news and the blackout also shut off traffic lights, snarling traffic countywide.