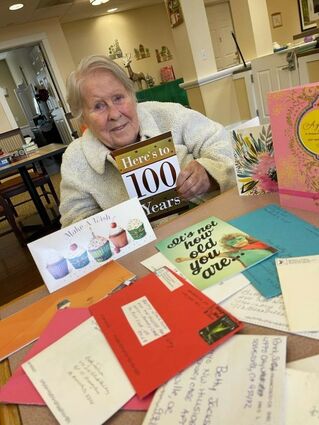 Betty Jackson, a downtown Fallbrook merchant and restaurateur for over 50 years, passed away on New Year's Eve in McMinnville, Oregon, 17 days after celebrating her 101st birthday.

During her half-century on Main Street (she could never bring herself to call it Main Avenue), Betty created at least six successful businesses, two of which are remembered today as Fallbrook icons: The Country Cover Gift and Garden Shop and The Caldron restaurant.

She was born Mary Elizabeth Watkins in Aurora, Illinois, the third of four children. The household included her grandfather, Hall Of Famer James "Deacon" White, the first player to get a base hit in the first professional baseball game. She attended Aurora College where she fell in love with fellow student Robert Calvin Jackson. They married in 1943. Following Bob's military service as a bomber pilot in World War II, they made their home in Aurora, where their four children were born.

Bob was a native Californian who came from a long line of San Gabriel Valley citrus growers. Bob was not fond of Midwestern winters. Or summers for that matter. In 1958, he purchased 60 acres of bare land on what is now Los Alisos Drive, planted 40 acres of avocados and lemons and built a house.

With all of the kids in school, Betty decided to start a business of her own on the ranch. She grew and sold flats of ground cover such as ice plant and ivy and served her customers herbal teas. She called it The Country Cover Nursery.

When an artist friend of Betty's bought a rundown gift shop in the oldest commercial building in Fallbrook at 119 North Main, she invited Betty to sell her ground cover in the empty lot behind the store. They called it The Country Cover Gift and Garden Shop.

Betty and her partner had a falling out, as partners often do, and Betty ended up with the gift shop. In just a few short years, she turned it into a thriving boutique that attracted visitors and locals alike. There was no other shop like it anywhere.

In 1967, Betty and Bob built a two-story building behind the gift shop with the idea of leasing the upstairs as a restaurant. At least four restaurants came and went before Betty decided to just do it herself.

The Caldron became an even bigger Fallbrook institution than the gift shop. It was originally open for lunches only, but later on added dinners. And, again, there was no other place like it. It was where people took their out of town guests and said, "this is Fallbrook." And it was, but it was also all Betty.

After a dozen years of The Caldron, the Jacksons sold the property and businesses with the idea of retiring. They were in their late 50s. But the people who bought The Caldron and the rest of Jackson Square went broke and walked away. So Betty and Bob had to take the property back.

They leased the upstairs out which became Le Bistro, a fine restaurant in its own right. Downstairs the Jacksons created Square One, a small luncheon spot that featured the first espresso machine in a Fallbrook restaurant. Later, and now in her 80s, Betty started a consignment store in the original Country Cover shop.

They're all gone now, the merchants and shops that defined Main Street Fallbrook in the last quarter of the 20th century. Harrison's Rexall, Fallbrook Hardware, Ports For Men, The Westerner, Wards Jewelers, Village Stationary, Vivian's, Spence Shoes, Western Auto. And Betty's gone now as well. She loved being a part of downtown. She loved her many friends, customers, fellow merchants and employees. She saw a need and filled it as best she could. She loved this town and its people and they loved her back. And that's a pretty good life.

Bob Jackson died in 2009, a few months short of his 90th birthday. Betty is survived by her son Caddy and his wife Janet; her daughter Elizabeth Zane and her husband Tim; and her son James. Betty and Bob's eldest son, Jon, died in 1969.

No memorial service is planned. Betty would rather you have a cup of coffee and a piece of Mile High Strawberry Pie and remember the good times we all had.