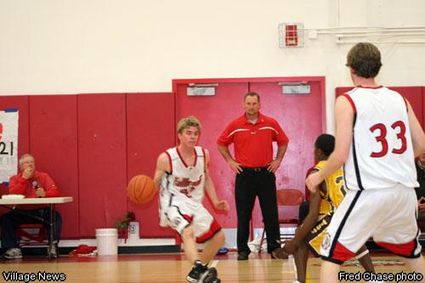 Warrior Tyler Straeter (#22) decides on a strategy during the fierce Fallbrook-El Camino battle.

The Fallbrook Warriors varsity boys basketball team surprised the El Camino Wildcats Tuesday, February 13, by putting up a fight the Wildcats did not expect.

El Camino is the number one team in the county and has consistently beaten their opponents by 30 points or more, but not on this night in the Fallbrook Barn.

The Wildcats were beginning to pull away from the Warriors by halftime with a score of 33 -21 but Fallbrook came out strong in the third quarter and outscored El Camino 16-9, pulling the Warriors to within just three points at one time.

The Warriors eventually lost the game 68-...