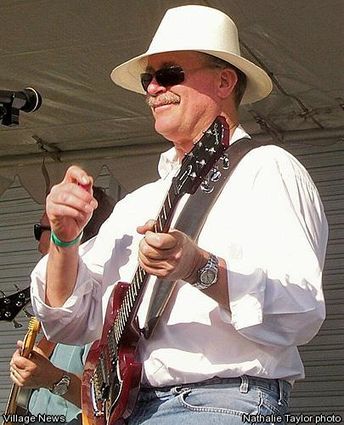 At the Ivy Street garden, visitors danced to the music of Salt Creek, a country rock band from Lake Elsinore. The band, formed by singer/songwriter Julie Ryan and bass player/songwriter Ray Agueros in 2005, blended a variety of music styles which came together as a style all their own. Ryan sang lead vocals and was backed up by another female vocalist. Wielding tambourines, the energetic women added their strong voices to the men in the band, who played guitars and bass.

Some of the songs they played were their own material and others were borrowed from other artists including Shania Twain. The Twain songs were country with a pop flavor. The Eagles’ “Hotel California” and the country/rock song “I Fought the Law” were also adeptly performed, demonstrating the versatility of the band.

The venue at Scrappy’s featured Blue Zone, a classic rock and roll and blues band from North County. If their music has a familiar ring to it, the band has been performing at the Avocado Festival for 13 consecutive years.

Ken Engle plays the guitar and harmonica and sings lead vocals. Hal Schmidt is the band’s keyboard player and backup singer. Chris Pritchard plays the lead guitar and his son, Eric, plays the drums. Bass guitarist James Hoskins adds his talent and vocal ability to round out the group. 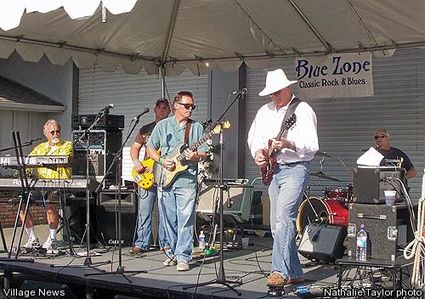 Blue Zone played at the Avocado Festival for their 13th year.

The band played a repertoire of popular songs including those of ZZ Top. Most of them are from the ’60s through the ’90s. The audience was a group comprised of listeners of all different ages and looked like a well-behaved crowd.

Shane McSheehy and his wife, Rachel, listened to the band for quite a while. “We both enjoyed them,” Shane commented.

One of the band members, Chris Pritchard, played the guitar and toured during the 1980s with the rock group The Surfaris. This is the band that gave the world the hit songs “Surfer Joe” and “Wipe Out.”

Pritchard, along with playing for Blue Zone, also lends his guitar expertise for worship music, especially for the youth, at St. Peter’s Catholic Church in Fallbrook.