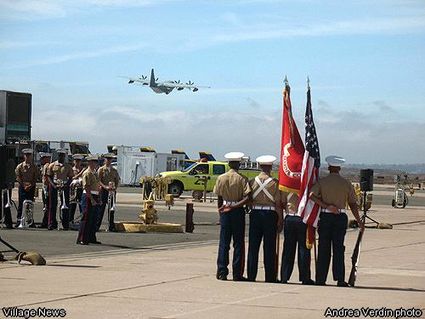 Marines stand at attention as a KC-130 aircraft takes off during the commencing ceremonies of the Miramar Air Show.

Residents from all over San Diego County were able to enjoy the aerial acrobatics and stunning feats performed at the MCAS Miramar Air Show October 3-5.

The theme of this year’s show was “A Salute to Marine Corps Aviation.” It focused on the men and women who are the essential core of Marine Aviation and the inventory of aircraft they fly and maintain.

The air show featured several static displays, military equipment exhibits and air show memorabilia along with the precision flying of the AV-8B Harrier, F/A-18 Hornet, the F-16 Fighting Falcon and the F-22 Raptor.