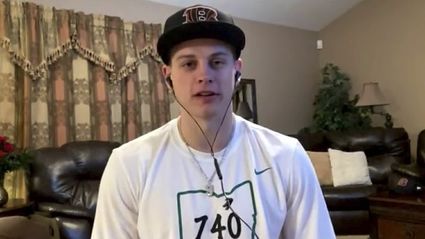 In this still image from video provided by the NFL, LSU quarterback Joe Burrow appears in The Plains, Ohio, during the NFL football draft Thursday, April 23, 2020. (NFL via AP)

For all the uniqueness of this NFL draft, including the angst over a potential communications fiasco, things looked and sounded pretty normal Thursday night.

Quarterbacks were in demand. Ohio State(the top three picks played there) and the Southeastern Conference (a record 15 picks) dominated. The Patriots traded out of the first round.

And Commissioner Roger Goodell even got booed, if only digitally.

"I do believe this draft is going to be the most memorable we have ever had," said Goodell, noting that it is accompanied by a "Draft-A-Thon" to benefit six organizations on the front lines ba...