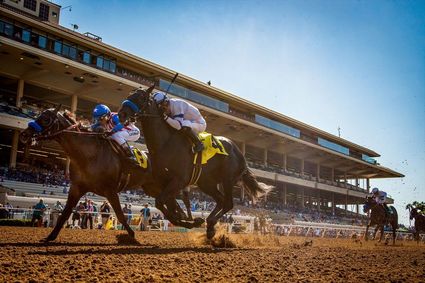 DEL MAR (CNS) - More races were scheduled at Del Mar Saturday on the first weekend after three racing dates were canceled because 15 jockeys tested positive for the coronavirus.

Many of the races that had been scheduled for last weekend have been shifted to this weekend. The Grade II $150,000 San Diego Handicap was scheduled for Saturday, and the Grade II $200,000 Eddie Read Stakes on Sunday.

Additional races will be held Monday to make up for one of the canceled days. The other two lost days will be made up later in the season, on dates to be determined, said Tom Robbins, the club's executive vice president for racing.

The Del Mar Thoroughbred Club responded to the positive tests that wiped out racing from July 17-19 by instituting new travel restrictions to include only permitting jockeys based in California to ride and prohibiting all jockeys who leave the track to ride elsewhere from returning to Del Mar for the remainder of the summer racing season.

Del Mar also re-configured and expanded its jockeys' quarters, including moving some of the functions that normally take place in the jockeys' room to an adjacent area.

A small group of anti-horse racing activists were planning to protest at the track Saturday. They claim that by keeping the track open for racing, even without fans, Del Mar is putting the community at risk of further spread of the virus for a non-essential activity.

Activist Ellen Ericksen of San Diego told City News Service that she has observed jockeys and stable workers not always social distancing inside the track, and occasionally wearing face covering that is not properly pulled up over their noses.

Those claims were disputed by Mac McBride, Del Mar's director of media.

``Extremists continue to misrepresent what is happening at Del Mar. With guidance from experts such as Dr. Ghazala Sharieff, Chief Medical Officer of Scripps Health and the San Diego County Health and Human Services Agency, we have implemented strict protocols to help prevent the spread of COVID-19 and to ensure the safety of our workforce, our athletes and our neighbors,'' McBride said. ``Del Mar continues to be one of the safest racetracks in the US for both our horses and the hard working people who care for them every day.''

On Friday night, Ericksen and a handful of supporters stood on the sidewalk outside the track's main entrance, projecting the messages, ``DEL MAR: CRUEL AS EVER,'' and ``KILL RACING NOT HORSES'' on the track's marquee for about 20 minutes.