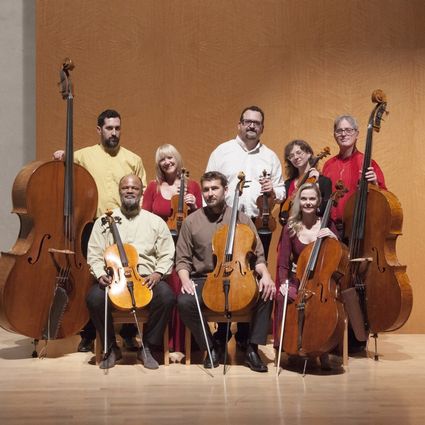 "We're excited to present Hutchins Consort, not only because this violin octet is considered among the rarest instruments in the world, but also because this performance will once again, demonstrate just how far traditional instruments have permeated other music genres," said Ann Murray, executive director.

The Hutchins Consort plays on the eight scaled violins of the violin octet designed and built by famed luthier Dr. Carleen Hutchins who in 1957 was challenged by American composer Henry Brant to refine and implement a vision that began with the master luthiers of the Renaissance.

The goal was to produce a family of string instruments whose combined voices would span the entire range of written music and effectively fill the gaps left by the traditional string instruments (violin, viola, cello and bass) which form the core of the modern symphony orchestra.

Hutchins spent 30 years in research and experimentation and in the early 1960s, applied her knowledge and skills to eight instruments which she personally hand-crafted and calibrated to match harmonic overtones throughout their ranges.

The instruments are the first successful attempt to create an acoustically balanced set of instruments that can truly sound like violins across the entire range of written music.

The Sept. 27 program includes a little of everything from John Dowland's traditional classical Lachrimae Antiquae to contemporary classical works from Bartók and Monti, to Celtic and even ragtime jazz selections.

"The diversity of the Hutchins Consort program shows the impact traditional classical music instruments have had on the development of all music forms. This is really quite a concert!" continued Murray.

The concert can be viewed at any time at FallbrookMusicSociety.org. More information is available by calling the Music Society at 760-451-8644.