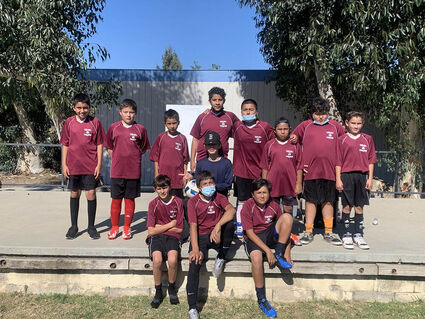 The seven small K-8 elementary schools and middle schools in northern San Diego County and southern Riverside County which participate in athletic tournaments each month converged upon Rainbow for the Nov. 4 Vallecitos Soccer Tournament, and the Vallecitos girls placed third.

Vallecitos defeated Cottonwood Elementary School of Aguanga in the third-place match. The Vallecitos boys lost two of the Vikings' three games in pool play and did not place.

The girls played at Rainbow Park, which is owned and maintained by the County of San Diego and has a synthetic turf surface, while the boys utilized the Vallecitos Elementary School playground. Four referees volunteered their time for the Vallecitos Soccer Tournament: father and son Tony Avila and Tony Avila, Nick Guerra and Andy Borello. Borello is the parent of a Julian Middle School player and volunteered to officiate when one of the planned referees could not be present. Vallecitos coach Ray Hanbeck officiated the third-place boys game.

The games utilized a 20-minute running clock. The teams were divided into two pools; each team played each other team in the pool before the pool winners played for the championship and the pool runners-up played in the third-place game. Warner Middle School in Warner Springs did not field a girls team, although the Wildcats had a boys team which placed third.

Vallecitos had 18 players on the girls team. "We didn't play everybody," Hanbeck said.

The Vallecitos girls began with a 3-0 victory over Pauma Elementary School. The goalkeeper shutout was recorded by eighth-grader Yamilee Rico with the help of four seventh-grade starting defenders: Isabel Chavez, Judith Cruz, Melissa Maciel and Mayra Matias. Two of the goals were scored by sixth-grader Dalina Hernandez while eighth-grader Berenice Yanez had the other successful shot.

"They did well," Hanbeck said.

Not only did Julian Middle School win the girls championship, but the Timberwolves did not allow any goals during the tournament. In pool play, Julian took a 2-0 victory over Vallecitos.

With three teams in each girls pool, the Vikings' 1-1 record gave them second place and put them into the third-place game against Cottonwood. Vallecitos prevailed by a 4-0 score. Yanez was the goalkeeper in the third-place match with Rico playing midfield and Chavez, Cruz, Maciel and Matias as the starting defenders. Hernandez scored twice, Rico had one goal and sixth-grader Kathy Rojas placed one shot into the net.

"They obviously dominated during that game. They must have had a pretty good handle on how things were going, so I'm very happy about that," Hanbeck said. "They should have a pretty good team next year, too."

The first-place match between Julian and Hamilton Elementary School (Anza) ended as a 1-0 Julian win.

The 12 Vallecitos boys included one eighth-grader and two seventh-graders. "Nine of the 12 were fifth and sixth graders," Hanbeck said. "We had a young boys team."

The Vikings played without the goalkeeper who broke his ankle, a defender who sprained his ankle, and a forward who had a muscle sprain. None of those injuries occurred during the tournament.

"It was just a well-played game. Both teams played well. It was hard-fought. It was pretty evenly matched," Hanbeck said.

Warner scored the first goal in the Vikings' second game. Duran scored the equalizer, and the score was 1-1 at the end of regulation. The teams went to the penalty kick shootout stage which began with three shots for each team. The Wildcats won the shootout for the victory.

"It was well-fought again," Hanbeck said. "This time they got the better of us."

Vallecitos closed out pool play – and what would turn out to be tournament play for the Vikings – with a 3-0 loss to Julian. "They beat us handily," Hanbeck said. "The kids were too big and experienced compared to my younger kids."

There was no fifth-place game between the third-place pool teams, so the on-field Vallecitos activity concluded with the Vikings winning one and losing two. "They were playing against seventh and eighth graders," Hanbeck said. "It's pretty apparent." 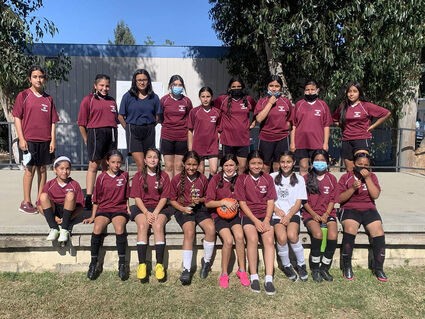 Julian and Borrego Springs played in the championship match. The game was scoreless after regulation and after a field overtime period. The initial three-round shootout also ended in a tie, sending the match to a sudden-death shootout. Neither team made their shot in the fourth round and, in the fifth round, Borrego scored and Julian didn't to give the Coyotes the boys championship and the Timberwolves second place. Warner defeated Cottonwood in the third-place match.

"I think the boys have a good future," Hanbeck said of his team. "In a couple of years I think they'll be more competitive."

Each school hosts a different sport each month. The next tournament will be a flag football tournament which will be played Jan. 16 if weather permits. Cottonwood will host the tournament but the Cougars do not have their own field, so the competition will be played at Hamilton High School.