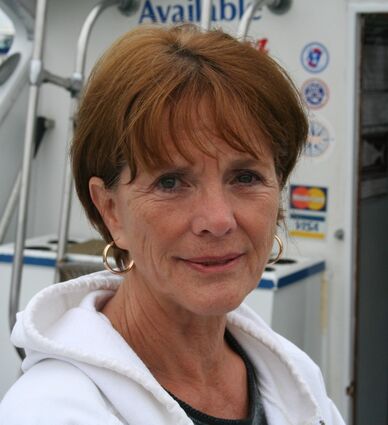 Shirley Fahnestock of Fallbrook, died at age 79 on May 18, 2022 with Alzheimer's disease. Shirley was exceptionally sharp and charming, a loving mother and full of talent and gumption. She was born in 1942 in Crossett, Arkansas, and raised in San Bernardino, California, with her three sisters.

After raising her children, and years working in private and government organizations, Shirley's experience, smarts and outgoing nature landed her a job as manager of the chamber of commerce in Durango, Colorado, in 1983. There she met her future husband, Jim Fahnestock, a local artist and owner of Durango Signs. The two moved back to California in 1986, where she worked for the Long Beach Chamber, winning monthly sales awards.

After a year in Malaysia as expatriates and Jim working in outdoor advertising, the two opened Jim's Sign Shop in 1991 in Fallbrook, where both became active in local theater. For the Fallbrook Players, Shirley's work included "Our Town," "Murder at the Rutherford House" and, her favorite, "Whodunnit." The couple joined the Fallbrook Chamber, North County Networking, and Shirley raised money to run for Fallbrook's honorary mayor in the mid-90s.

Shirley is survived by her husband; her son, Sean Olson (wife, LeAnn), now owner of Jim's Sign Shop; her daughter; three stepchildren; and 11 grandchildren and great-grandchildren. The family held a private celebration of Shirley's life in May. In lieu of flowers, Shirley would want you to support Fallbrook businesses by shopping locally.