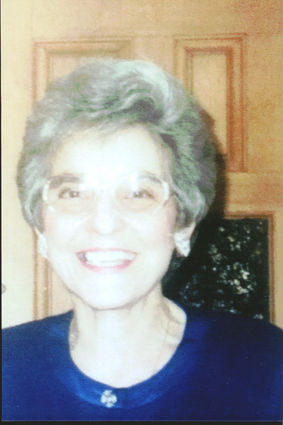 Mary James Lessaris of Fallbrook, California, passed away peacefully at home Feb. 23, surrounded by her loving family. She was 91.

Mary was born August 31, 1927 in Freeport, Illinois, to Greek immigrant parents, both from the island of Samos, James and Efrosene Lempares. The family moved from Freeport to Waterloo, Iowa, and then to Fort Dodge, Iowa, where Mary grew up and attended the local schools.

She attended the University of Northern Iowa. While she was working on her bachelor's degree in Family and Consumer Sciences Education, she was a violinist and an alto in a college sextet that traveled and entertained throughout Iowa.

Active in worthy causes and her social sorority, she was also crowned as "Miss Carnation" pageant queen her senior year. After completing her undergraduate work, she moved on to Champaign-Urbana (C-U) where she attended the University of Illinois, earning her master's degree in Nutritional Sciences.

During her first week of living in C-U, she met the love of her life, John Lessaris, who was in the United States Army, having returned from military duty in Europe. They married in 1950; military life took them to Mobile, Alabama, until John left the Army, and they returned home to Champaign-Urbana to raise their family of three children, Connie, Tom and Francine.

While John and his two brothers ran the popular family owned restaurants and confectionary, Mary devoted her life to raising her children and volunteering. Mary was deeply involved in the school life of her children, serving as room mom, scout leader, sports booster, and President of the elementary school PTA and later of the high school PTA.

She never missed one of her three-sport son's athletic events nor any of her daughters' musical and theatrical performances. When the children grew up, she returned to teaching at the local high school.

Deeply faithful, Mary served in various capacities with her church community. She and her husband were part of the five founding families of Three Holy Hierarchs Church in Champaign, Illinois. One of the founders and first leaders of both Philoptochos Society and Daughters of Penelope chapters, she also directed the church choir for 30 years.

In 1994, John and Mary moved to Fallbrook, California, where they were able to help care for two of their grandchildren. As members of Saints Constantine and Helen Greek Orthodox Church, Cardiff-by-the-Sea, they were immediately surrounded by an active church community, full of warmth and benevolence.

Mary was an extraordinary homemaker who sewed doll clothes and dresses for her daughters. Well respected in the kitchen as an excellent cook and baker, she was featured several times in the local (Champaign-Urbana) newspaper for her various recipes, especially of Greek foods. She was well-respected for her entertaining, especially with various holiday parties and Name Day celebrations.

Throughout her life, Mary delighted in babies, dogs, chocolate and music. Including a dog, plenty of chocolate and music in her house, her home also always reflected one of her favorite expressions, "Cleanliness is next to godliness." An avid gardener, she also enjoyed thoroughly reading the newspaper and clipping articles to share with her family members.

A strong advocate of equal rights for all individuals, she believed that all people should have the opportunity to pursue higher education as a means to protect and preserve our democratic ideals. Proud of her father's American military service in World War I and her husband's service in World War II, she was a lifelong supporter of veterans organizations.

Disciplined, courageous, fiercely loyal and intensely faithful, Mary believed every day is a gift from God, and we must be thankful. Mary's loving dedication to her children, their spouses, and her four grandchildren gave her fulfillment and joy throughout her life. A true servant of our Lord, Mary will be remembered for her genuine warmth and interest in all individuals, and for her vibrant smile that she continued to bravely show, even on her last day of life on Earth.

The trisagion (wake) service will be at 7 p.m. Friday, March 1, at Saints Constantine and Helen Greek Orthodox Church. Then the funeral service will be at 11 a.m. Saturday, March 2, at the same church followed by the traditional fish dinner and then burial at El Camino Memorial Park, Sorrento Valley.